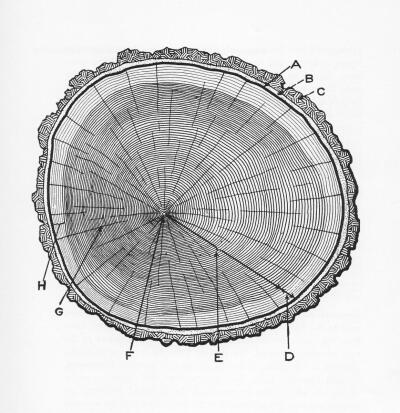 A. - CAMBIUM. A very thin layer of living cells lying between the inner bark and sapwood, where the new wood and bark cells develop each year.

B. - INNER BARK. Serves to carry the food manufactured by the leaves to the cambium layer.

D. - SAPWOOD. The lighter colored band of wood between the inner bard and darker heartwood. It carries the sap from the roots to the leaves.

E. - HEARTWOOD. Formed by a gradual change in the sapwood by which it becomes darker, heavier and often more durable. Most trees form heartwood. It is inactive but gives strength to the trunk.

F. - PITH. The soft spongy tissue in the center of the tree trunk and all branches. The pith in some trees is so small it is not discernible without greatly magnifying it.

G. - MEDULLARY RAYS. Wood rays or medullary rays are very small, flat, vertical bands or ribbon-shaped sheets of tissue (ducts) connecting the pith with the various layers of wood and the inner bark, and by which food and water are stored and transported horizontally in the tree.

H. - ANNUAL RING. Each year a tree adds an additional layer of wood to is circumference, this layer forming immediately beneath the bark and is called "annual ring" or "growth ring". In the spring the newly formed cells are thin-walled and spongy, called "springwood," while in midsummer and fall the walls of the cells become thicker and more dense, called "summerwood."

Springwood and Summerwood: Annual rings are divided into two layers, the inner and the outer. The soft open wood of the inner layer formed in the springtime is called "springwood,' and the more dense and harder outer layer formed in the summertime or balance of the growing season is called "summerwood." These layers differ in physical properties. In the "springwood" the cells have rather large cavities and thin walls and the wood is softer, weaker and lighter in weight than the "summerwood." Climate, soil and habitat influence the rate of growth and consequently the size of the cells. Some species such as catalpa, willows, cottonwood, loblolly pine and some of the oaks, have wide annual rings in which the "springwood" and "summerwood" may be identified without great difficulty. Other species such as the persimmon, maple, gum, birth and magnolia have narrow annual rings in which the "spring-wood" and "summerwood" are difficult to detect.

The "wood increment" is the annual wood growth of the tree each year. The figures produced by the growth rings when sawed by different methods are very pronounced and attractive in some woods such as ash, butternut, birch, chestnut, elm, oak, black walnut and many others.

Sapwood and Heartwood: The outer active portion of the tree, next to the bark, through which the sap (water and salts) flows from the roots upward and which forms the living tissues of the tree, is called Sapwood. The portion from the inside edge of the sapwood to the center ( or pith) of the tree is called Heartwood, or what Foresters call a dead core without vital functions so far as the life of the tree is concerned. Its technical functions are mechanical only, giving strength to the trunk. As a rule the sapwood is void of very much color or distinctive markings. In some woods such as osage-orange, black cherry, butternut and Kentucky coffee-tree, the sapwood is very narrow. In other woods such as basswood, hackberry, maple, loblolly pine and beech the sapwood is very wide. In the description of the wood under each species the distinction in color between the sapwood and heartwood is given. The bark discolors the sapwood in some woods if it is not immediately removed after the tree is cut. Sap stain of a bluish color is frequently imparted to some woods if the log is left in the forest or in the skidways any length of time. Generally logs should be sawed into lumber very soon after the trees are felled.